Mungiu returns with a new, wide-scaled work that opens a new page to his filmography and is the most complex narrative he has so far provided. 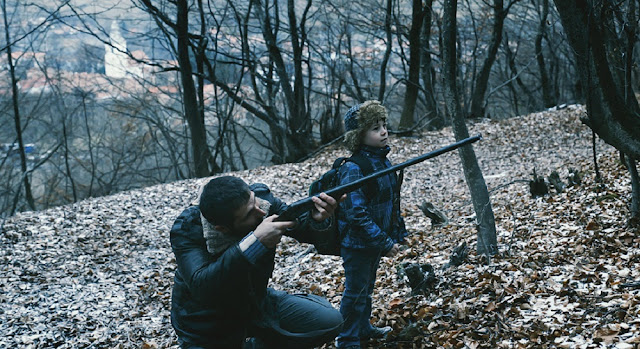 Set in a village in the transilvanian region - known for a pervasive multiculturalism - the film is inspired by a real case of racism within a local community, and the way it shakes the delicate interethnic balances. The title - romanian for the MRI scan - could also be interpreted as an acronym of the three main ethnic groups that coexist in the region: Romanians, Hungarians (Maghiari) and Germans (which also can be called Nemti). The dual meaning suggests that the film is a MRI scan of sorts that is being made to a society, a trasversal analysis of western Romania, and underlines the integral centrality of the three populations to the story. Thus, the film features extensively three different languages: Romanian and Hungarian mostly, but also German. Foreign viewers can distinguish the languages through the subtitle colours.

Unlike Mungiu's past endeavours, which portrayed a microcosmos of very few characters, sometimes ideally small scoped, as in Graduation, sometimes spacially reduced, as in 4 months, 3 weeks and 2 days (relegated to a hotel room for most of the action), or Beyond the Hills (almost entirely set in a very small monastery), RMN is set in a town, and features a wider set of characters, as well as wider visuals, which often encompass several layers of mise-en-scène: the main action of a sequence, in the foreground, is often accompanied by more background actions and details that have relevance later in the plot.
A specific scene with over a hundred people on screen, including almost the entire cast and several extras actively engage simultaneously in an uncut, 17 minutes long, still shot, dense of on-screen activity.

In no way the scene result being boring, the heated dialogue and the variety of performances offered by each person scene in the sequence makes it a most entertaining sequence. The film itself, despite technically reminiscent of Mungiu's previous films, has a faster pacing due to the complexity of the simultaneous narratives as well as thanks to the truly gorgeous landscapes of the transilvanian region, only competing with Beuond the Hills in beauty.

What really makes RMN revolutionary in Mungiu's filmography is the presence of more universal topics than his previous films. Fear and the unknown are central themes to the film, and they are both embedded in the storyline as well as in the visuals: the town is circled by a forest, connotated with the tropes of puritan literature (as for example in Robert Eggers' film The VVitch).
Moreover, the dualist opposition between animal and human is persistent in the film both in the literal sense and in the metaphorical sense. The two main characters, the impulsive and aggressive Matthias and the rational and romantic Csilla are also embodiments of this opposition, as might be the very cryptic ending.

If Mungiu's previous films featured no score, the detailed soundscape of RMN - which further expands the scope of the narrative towards unseen story elements - has an extensive presence of intradiegetic music: the theme from In the Mood for Love pervades Csilla's more romantic (almost parodistically pathetic) emotional outbursts, folk songs allow to further identify the various ethnic groups. Therein lies a great achievement by Mungiu: the accuracy with which it represents the consistent minorities from Transilvania without any filters or embellishments, both with the positives and the negatives, avoiding a redundant and heavy  assessment of the political reasons that brought to the past conflicts between them.

This film openly embraces a metaphorical or metaphysical ending, or at least one not rationally explainable. It is premature to explore the various possibilities for its interpretation - which Mungiu refused to provide at Cannes during the Press conference - but the relevant aspect to note is the very existence of this choice, as this is the first time Mungiu tampers with the supernatural in his films. It is Impossible to foresee where will this lead the filmmaker's future efforts, but certainly it indicates that his possibilities as one of the greatest east european auteurs are still surprising and far from spent.